Home 9 About 9 Our Pastor, James West 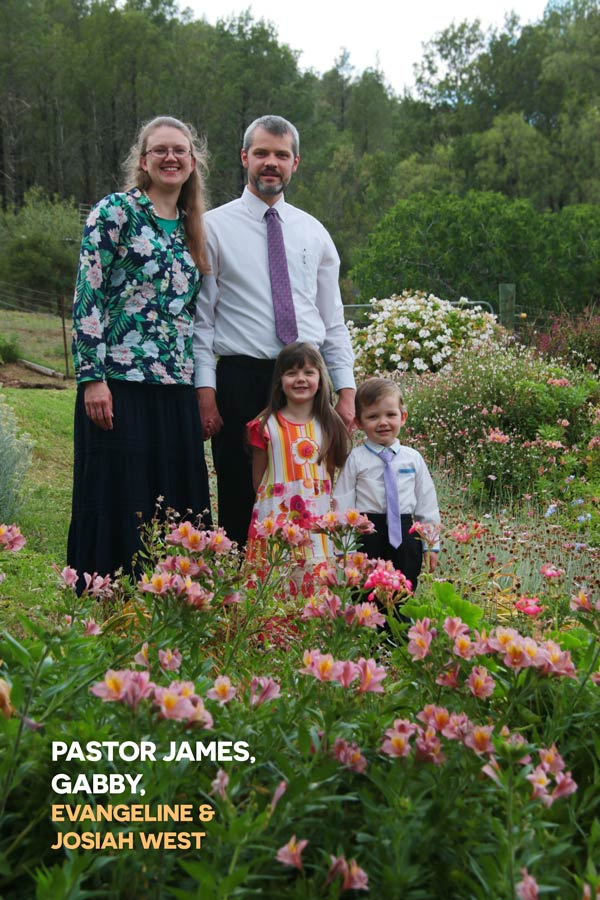 Pastor James West was born in Toowoomba, Queensland, and saved when he was six years old. It was around this time that the family moved to Sydney, so his father Graham could study at Bible college.

As a young boy, James was involved in many church activities at Metropolitan Baptist Church, such as singing duets with his mother Cathie and doorknocking with his father. He also had his first experiences of street outreach. While his father took turns preaching with other men, James helped hand out tracts.

At around the age of 8 or 9, James felt himself to be stirred during the sermons at church and sensed God would have him to be a preacher one day.

James met his future wife Gabby at Tamworth Bible Baptist Church, while the family was on deputation to prepare for mission work in PNG. Little did the family know that one day they would end up ministering at this church. Just two years after the visit, God changed their course and James’ father Graham was called to pastor the church there.

As a young adult, and on into his late twenties, James undertook Bible college studies by correspondence. He became pastor of Tamworth Bible Baptist Church in January 2014, when his father resigned due to terminal cancer.

The Wests have been blessed with two young children, Evangeline and Josiah, whom they desire to lead in God’s ways.

Pastor James has a heart for the lost and enjoys sharing the gospel. He is also burdened for young people, and his goal is to provide them with answers to face the spiritual battles they find themselves in. He desires to warn, do the work of an evangelist, shepherd the flock, and teach.